“People are frugal in guarding their personal property; but as soon as it comes to squandering time they are most wasteful of the one thing in which it is right to be stingy.” —Seneca

We all have regrets. Many of us are even in the midst of making decisions that our future selves will regret.

Seeking to minimize future regret is a useful heuristic when faced with an important life decision. However, not all regret is bad.

There is regret that comes from folly, and we want to avoid that type at all costs. But sometimes, some forms of regret stem from a wise decision.

How could you ever regret a wise decision you might ask? Let's take a look.

We often regret decisions (no matter how prudent at the time) when they result in a bad outcome.

Let's say you are planning an extensive home renovation project. Out of an abundance of prudence, you decide to wait on the project for a year in order to be in a stronger financial position. However, during that year market forces cause your project to be more expensive. You made a wise decision by delaying the project, but are rewarded with an unforeseen negative consequence.

In another example, let's say your wealth was concentrated in a single company stock. You do not feel comfortable with the risk of having all of your eggs in one basket, so you do the prudent thing and sell the stock to diversify your portfolio.

At first you let out a sigh of relief, however, each day it seems the stock you sold keeps going up. The stock goes up another 500% and you'd have been wealthy beyond your dreams if you held onto it.

But if you held onto the stock and its price cratered, you would have suffered regret from folly (the bad kind of regret).

Without knowing what the future holds, the most prudent way to make decisions is to play the probabilities. If you do so throughout your life, the probabilities will eventually turn to your favor, but not without a number of regrettable outcomes.

When you find yourself regretting a wise decision, pat yourself on the back. To avoid the regret from foolish decisions, you must endure a little regret resulting from wise ones.

This last month, I (Bjorn) took a week with my family to stay at my parent's lake house on Lake Pepin. With the benefit of technology I was able to work 50% time. The most memorable afternoon came ﻿when Dietrich (age 8) and Selah (age 10) and I kayaked to a beach to meet Leah and the other two children. I dragged the Lilly Pad behind my Kayak so we could have something to play with in the water.

After a wonderful afternoon, it was time to kayak back to the house for a client meeting on Zoom. Selah opted to go back in the car with mom, so it was up to me to drag both the Lilly Pad and her kayak behind mine. Given the extra weight and that we would now be going against the current (for those of you who are out of state, Lake Pepin is actually a part of the Mississippi River), I budgeted double the time it took to get there to get back.

This plan worked well until Dietrich became too tired to go on. No amount of encouragement and no promise of infinite sugary rewards could motivate him to paddle further (notice his look of despair in the photo above). This was a significant problem because given the current, without paddling we would drift backwards. Furthermore, it was getting close to meeting time.

There was no other choice. I had to drag Dietrich, the Lilly Pad, and Selah's empty kayak against the current by myself. Given the upcoming meeting, we had to move fast too. This became one of the most miserable workouts of my entire life.

In the end, I was late for the meeting (it took 1.5 hours of desperate- 10 out of 10 effort paddling!). Luckily we have wonderful clients and they were forgiving (thank you M&M!). They laughed at my plight exactly as much as I deserved. ﻿The only consolation I could offer is that at Quarry Hill, if necessary, we will work physically harder to be with you than anyone else ever has! 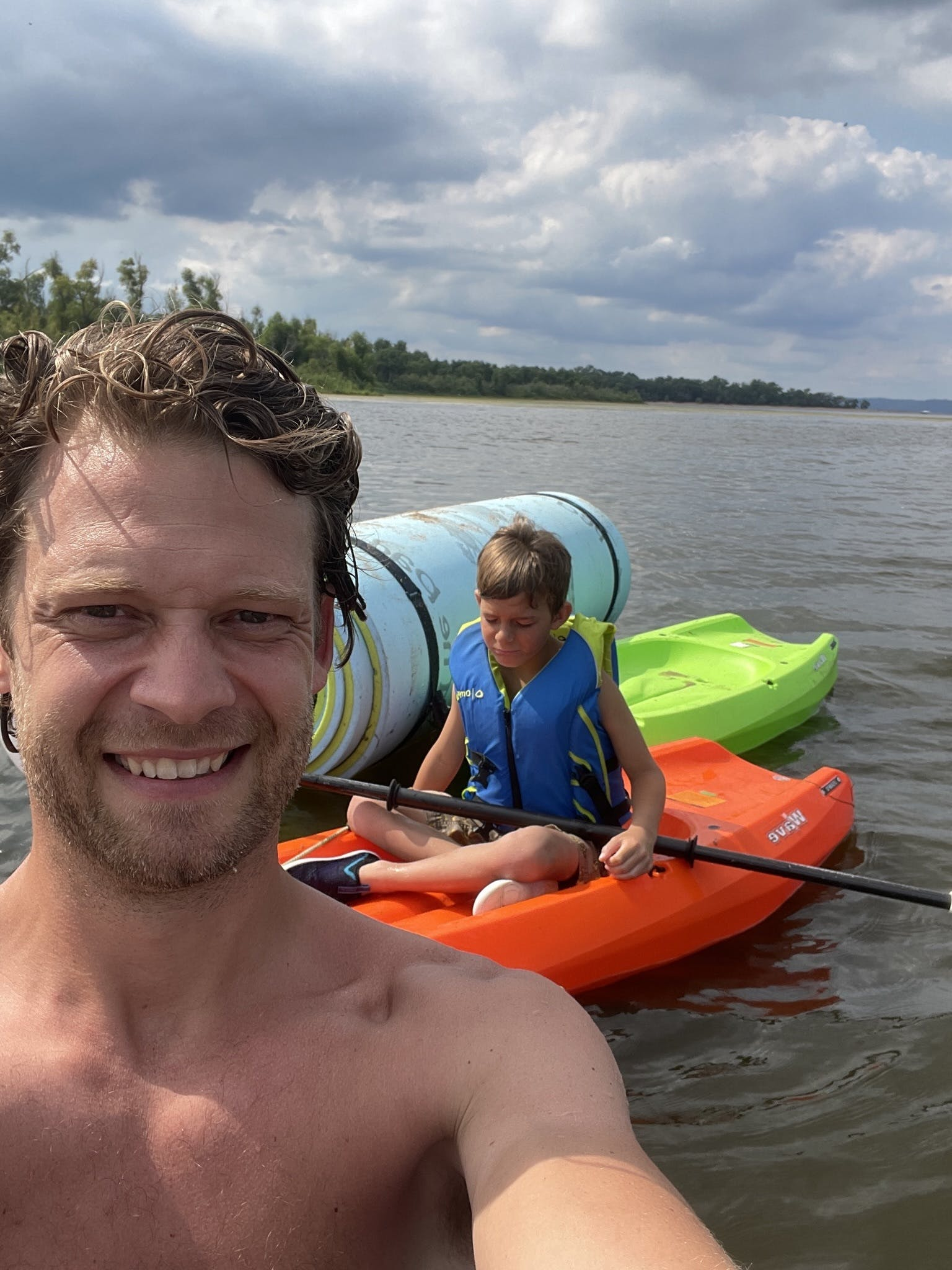